Did you know that South Africa ranks in the top three countries in the world for deaths and injuries by lightning strike ? Or that at least 100 South Africans are killed by lightning a year?

The recent heavy storms in Johannesburg and Durban should serve as wake -up calls around the huge risks extreme weather poses, both to our property and to us.

Lightning is a standard insured peril in personal lines insurance policies, and surge protection – against lightning strikes and electrical surges, both of which can cause extensive damage to homes and their contents – is a preferred way to avoid unnecessary losses and insurance claims. But while installing a surge protection device in your home is ideal for avoiding damage to your property, and even possible injury to you when you’re at home, it won’t safeguard you when you’re out and about. Like most types of accidents, lightning strikes are largely unforeseen.

But that doesn’t mean we shouldn’t be prepared for the day they happen; there are simple, practical steps that you can take to avoid becoming a lightning strike statistic. 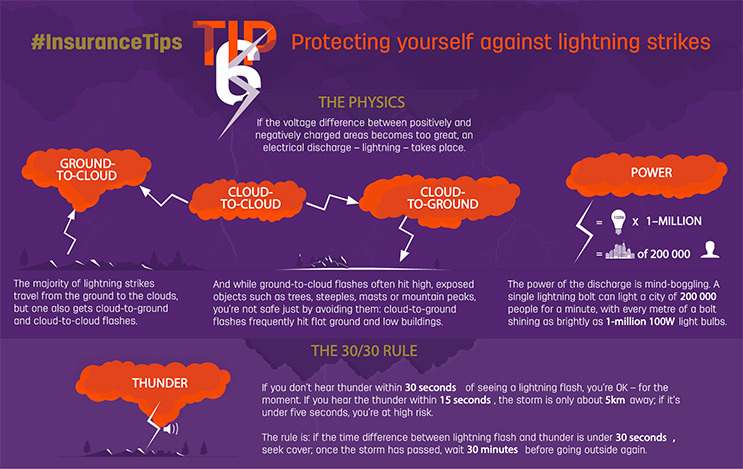 The best place to be during a thunderstorm is inside a building. It’s best to stay away from windows and metal – and not to use electronic equipment, telephones (even cellphones) and appliances, as well as not bathe or shower, especially if the house is not fitted with a surge protection device.

If you cannot get inside a building, your next best option is a car, which acts like a Faraday cage (the discharge stays on the outside of the vehicle). It’s better if the car is stationary, because blinding flashes can lead to accidents.

If you’re in the open, such as in a field or on a golf course, crouch, put your feet closely together, wrap your arms around your legs and keep your head down. Don’t lie flat – the current from a nearby strike will spread out along the ground, and through you. Importantly, put at least 3m of space between you and other people, as well as any thing you’re carrying. Like wise, be at least 3m from bicycles, trees, poles, masts, fence posts and metal fences.

If you’re in a boat or swimming, get to land as soon as possible. If in a boat, crouch down and avoid touching the rigging or any thing metal.

.. What won’t protect you